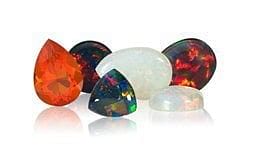 Care: Rated “fair” for everyday wear with care. Avoid exposure to heat and sudden changes in temperature. Avoid contact with chemicals. To clean, gently scrub with a soft toothbrush and a solution of mild dish soap and warm water.

Play-of-color occurs in precious opal because it’s made up of sub-microscopic spheres stacked in a grid-like pattern—like layers of Ping-Pong balls in a box. As the light waves travel between the spheres, the waves diffract or bend. As they bend, they break up into the colours of the rainbow, called spectral colours. Play-of-color is the result, the colour you see varies with the sizes of the spheres.

Five of the main types are:

The rarest and highly prized are black opals, commonly found in the lightning ridge area in Australia. Writers have compared opals to volcanoes, galaxies, and fireworks. Admirers gave extraordinary opals poetic names like Pandora, Light of the World, and Empress. In ancient Rome, this gem symbolized love and hope. The Romans gave it a name—opalus—that was synonymous with “precious stone.” With its pulsating display of play of colour, opal was long reserved for royalty. The crown of the Holy Roman Emperor held a superb fiery red Opal called The Burning of Troy which later was given by Napoleon as a gift to Josephine. Queen Victoria often presented opals as wedding gifts.

Because of its high water content, opals thrive when worn. If placed in storage or exposed to heat for too long, this magic stone will pale. Opal is often chosen to celebrate those born in October.